Thursday, February 2nd, 2023
THE LATEST
Home Revolution Can the Revs start 3 DPs and Buchanan at the same time?

On Saturday the New England Revolution faced off against MLS media darlings Atlanta United.  With said media paying particularly close attention to some Josef Martinez/Gabriel Heinze drama, it is easy to gloss over the fact that the Revs did something in Atlanta that they had never done before: WIN.

New England frequently looked dangerous throughout the first half, scoring the game’s first and only goal in the 18th minute. Whatever defensive struggles that plagued the team in previous games were absent, and they recorded their fourth shutout of the campaign.  The road victory ends a 3 game winless slide for New England.

The Revs also did something else in Atlanta that they hadn’t done before this season; look potent in attack with all 3 DPs on the field.

Bruce Arena deserves a ton of credit for taking New England from a last place team in the eastern conference, to one that analysts think have a good chance at winning MLS Cup, in just 2 short years.  He deserves further credit, as Sporting Director, for finding and signing designated players Adam Buksa and Gustavo Bou, who have combined for 12 goals this season.

There’s reason to think that number could be higher, though, since neither player has been a consistent starter this season.  Bou and Buksa have only started together in 5 of 14 games so far this season. It drops to 3 of 12 games when the full roster is healthy and available.

Arena is famously loathe to talk formations with the media, but the a formation switch is to blame for this stat.  Since May, the 4-2-3-1 has been the shape of choice when a full compliment of players are available.  Below is an incomplete look at the roster in said 4-2-3-1. 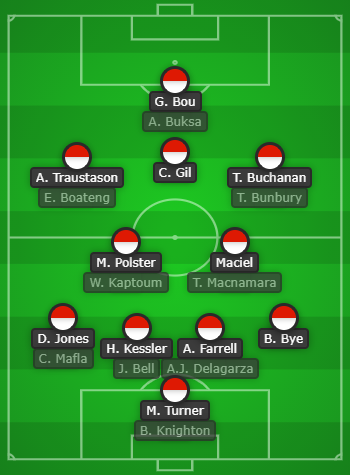 This formation has been Bruce Arena’s choice for a large part of the season because it allows star midfielder Carles Gil to play and operate from a central position.  Gil orchestrates the entire attack and, as such, allowing him to operate centrally opens up more passing lanes for him to exploit. Another benefit to this formation is that Tajon Buchanan is allowed to use his pace on the wings to widen the field, creating space for the lone forward and trailing midfielders to score.

The sacrifice in using this formation is that both Bou and Buksa can’t be on the field at once.  While not ideal, this has been mostly fine because…

Despite putting all 3 attacking DPs and, arguably their next best attacker, Tajon Buchanan on the field at once, they have looked less dangerous in the attack under a flat 4-4-2 formation. 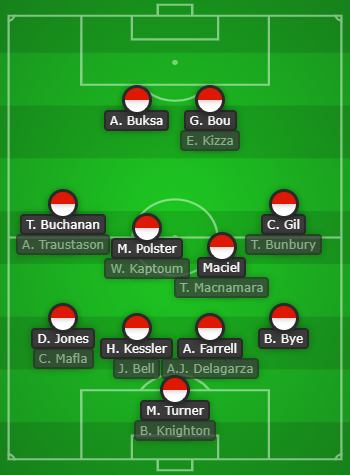 The obvious benefit of this formation is Buksa, Bou, Gil, and Buchanan are all on the field at the same time.

Another downside is that Carles Gil touches the ball much less in this formation than in the 4-2-3-1.  Gil ended up with about 30 more touches per game after the Revs switched to the 4-2-3-1 against Atlanta back in May.

So how did they make the 4-4-2 work against Atlanta? By shifting the midfield into a diamond shape with Gil at the point.

The 4-4-2 diamond could be a temporary solution

So right off the bat, all 3 designated players make an appearance in this formation.  That’s good.  Carles Gil starts centrally.  That’s also good!

Conspicuously absent from this lineup?  Wingers!  The diamond shape uses 3 central midfielders behind Carles Gil, instead of using a speedy outside forward like Tajon Buchanan.

In this case it was of little consequence, because the goal-dangerous winger was away from the team with Canada for the Gold Cup, where he has been racking up assists and acclaim.

Realistically, when Buchanan returns it may be hard to justify leaving him out of the starting lineup. Especially when he’s capable of this:

The dilemma as it stands

The Revs have tried 3 formations so far in 2021, and none of them is perfect.

The flat 4-4-2: All three DPs and Buchanan on the field, but with Gil out of position.

The 4-2-3-1: Two DPs and Buchanan in good positions, but without one of the DP strikers.

The 4-4-2 Diamond: All 3 DPs in good positions, but without the spark that Buchanan provides.

What do you think the Revs should do when Buchanan returns? Let us know on twitter!