Thursday, February 2nd, 2023
THE LATEST
Home Revolution 2 Key Stats at the Midpoint of the Season

If you are a fan of the Revolution, this was another very good weekend.  So good, in fact, that I’m going to have to use bullet points to summarize.

With all of that happening within the last few days, it’s easy to miss the fact that we are now officially halfway into the Revs 2021 season.  With that in mind, I’d like to take a look at the season so far, as a whole.  To do this, let’s take a look at a few key stats that explain how the Revs got to where they are, and where they could be going.

I could go with the easy stat here and just point to the standings.  After half the season, the Revs are current Supporters Shield leaders. They have 36 points from 17 games, good for 2.12 points per game.  Not to get anyone too hyped up about that but….

Worth noting that if the #NERevs have the same production from the second half of the season, they would tie LAFC for most points in a season at 72. https://t.co/TJfKVOaFn0

Instead I’ll reach for the ever so slightly less low-hanging fruit, and point to New England’s road record this season.

There’s a popular phrase in MLS about how to have success; “win at home, tie on the road”.  The Revs have done plenty of winning wherever they’ve played in 2021, with 5 road wins to compliment their 6 Ws at home.  New England’s road record is 5-2-3 good for 18 points.  On a ppg basis, that’s 1.8 points earned per game on the road, considerably higher than the 1.0 the old MLS adage suggests is desirable.

What is more striking, perhaps, is that it represents a shift in mentality from recent seasons.  In the years before Bruce Arena took over midway through the 2019 season, the Revolution struggled mightily on the road.  From 2016-2019 New England failed to get more than 3 road wins over the course of any season. Under Arena, that number has improved quickly with 5 road wins in a Covid shortened 2020 season, and the 5 already this season.

Fun fact, after 2000 (when MLS adopted ties), the best statistical season the Revolution had on the road was 2007 when the team won 6 road games from 15 attempts.  They finished the season with a 6-5-4 record on the road, good for 1.46 ppg.

No Revs team has ever had more than 6 road wins in a season. Could this team be the first to do it?

Carles Gil has been receiving a lot of plaudits as a frontrunner for the MVP race, and for good reason.  He leads the league in assists at 15, with half the season left to play.  The record for assists in a single season was set by Carlos Valderrama at 26.

Carles Gil is on pace to record 30 assists (rounded down) this season.

Can the #NERevs star catch El Pibe? I wouldn't bet against him. #NEvRBNY https://t.co/nKEMXr81t8

There are a whole host of attacking stats that I could have chosen from to really show how dominant he’s been this year. 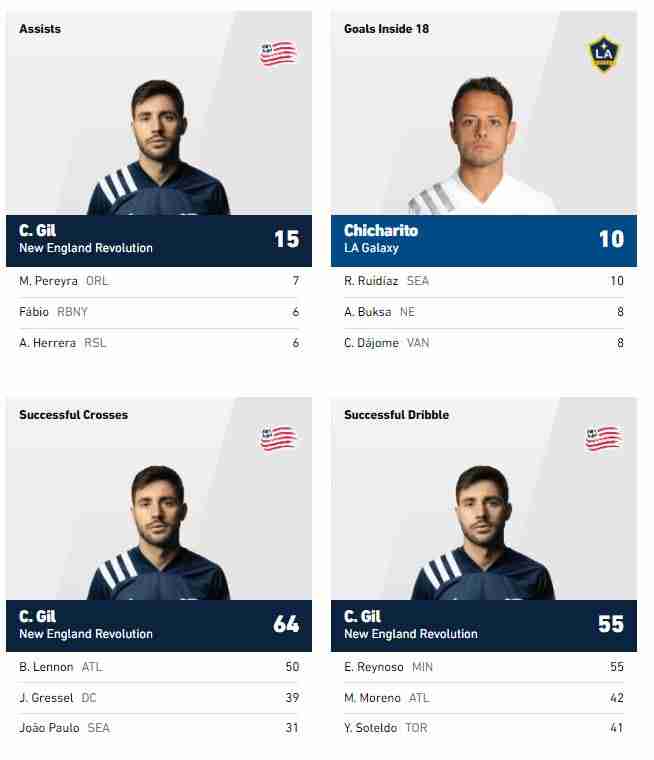 That’s a lot of Carles’ face!

He’s dominating in successful crosses, dribbles and (of course) assists with more than double the next best player.  Where he really shows his value, though, is with key passes.

Per opta, a key pass is “the final pass or pass-cum-shot leading to the recipient of the ball having an attempt at goal without scoring.”  Basically it’s passes that lead to an attempt on goal, not including assists.  Carles Gil has 75 such passes! For frame of reference, the next closest is Reynoso who has 47.

The Revs have had so much success this season, in large part, due to the constant chance creation from their Spanish midfielder.

If we consider a key pass an “assist level” pass, where the end product is not a goal, you could infer that he’s essentially had 90 potential assists.  He has claimed 15 of those this season, which is insane considering on 83% of those “assist level” passes, the revs aren’t scoring!

Do you have any stats that explain this season? If so we’d love to hear them over on social!