Thursday, February 2nd, 2023
THE LATEST
Home Revolution How Have the Revs Adjusted Without Gil

The Revolution lost their first game in well over a month, dropping a 2-0 result at New York City FC on Saturday.  It was a disappointing performance to be certain, but not entirely unforeseeable.  NYCFC are considered by some to be the best team in the league, and New England was missing a sizeable chunk of first choice starters.  The pigeons dominated large spells of the match, playing quickly through the midfield and getting a pair of goals from Valentin Castellanos.

Perhaps the biggest missing piece  for New England over the weekend (as for the past several weekends) was midfielder Carles Gil.  He has been away from the team with an unspecified muscle injury, but…..

Revs fans will certainly hope that his return to Foxboro spells an end to Gil-free starting lineups.  The Revolution have now played 6 games without Gil, going 4-1-1 in that stretch.  That is not a huge sample size, but it’s enough to give us an idea of how the team wants to play without him on the pitch.

Revs use speed on the wings to widen the field

Without Gil in the middle of the field to pick passes and distribute the ball, the Revolution have opted for a wider approach to the attack.  While they lack a true replacement for the Spaniard’s ability to link up play in the midfield, they make up for it in speed on the wings.  Tajon Buchanan, Dejuan Jones, and Ema Boateng all have a reputation as speedsters on the outside.  “Run hard and put in crosses” is a tried and true soccer philosophy and it was utilized to great effect against Cincinnati.

The use of the full width of the field can also be seen when looking at the passing charts.  The Revolution played another fairly dominant match against Cincinnati FC earlier in the season.  The first meeting took place in Cincinnati with Carles Gil in the starting 11.  The second match was at Gillette and came after his injury. 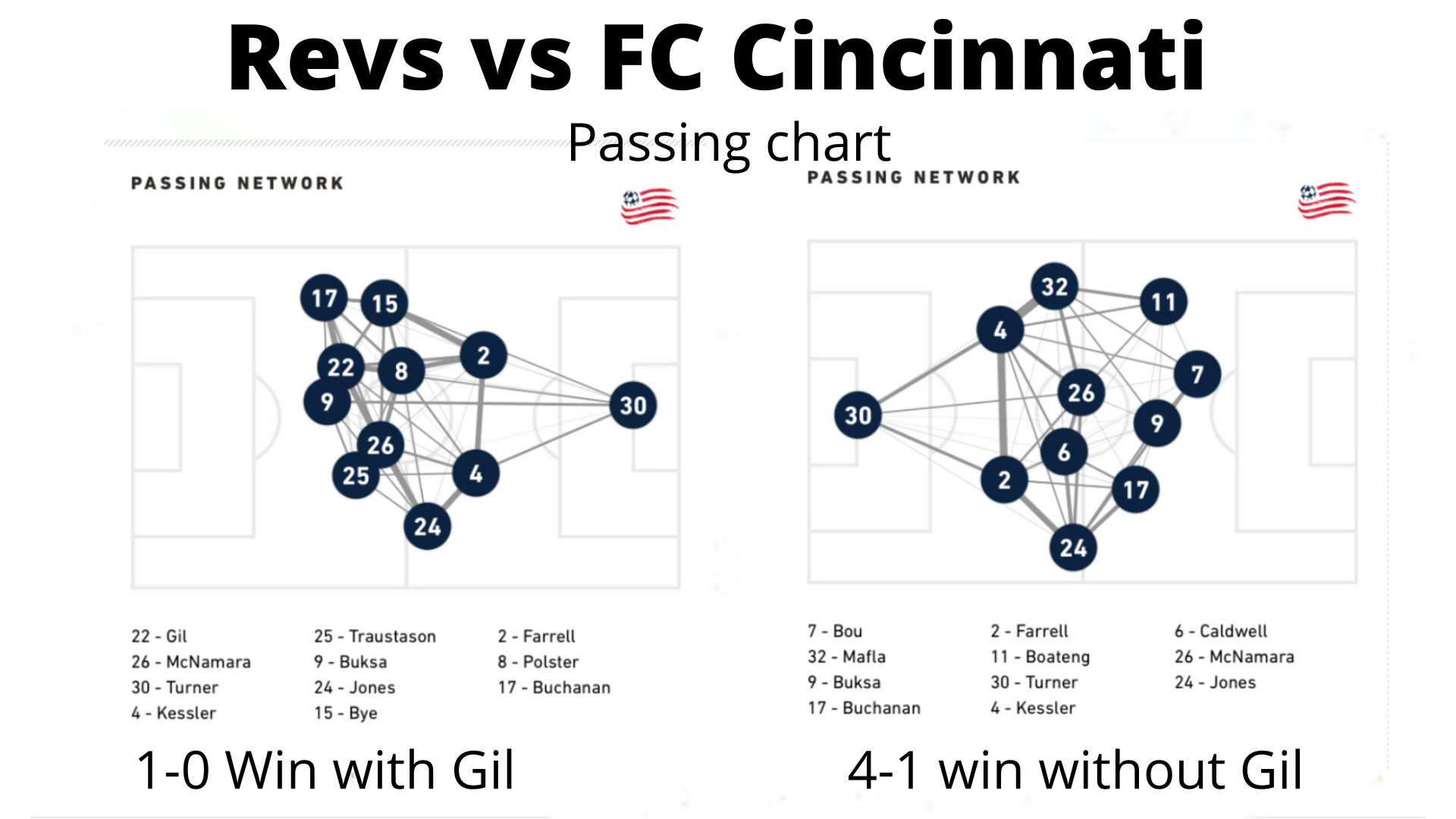 Without Gil, the fullbacks are pushed high and wide on both sides to stretch the Cincinnati defense. With Gil in the lineup, the midfielders create more from tight spaces in the middle of the field.

Who is making up the difference?

Gil has been given the nickname “el magi” because of his magical ability on the ball.  He excels at precision passing and ball control. These skills have allowed him to lead MLS in assists and key passes, STILL.  He’s leading the league in both categories and he’s missed 6 games so far.  It’s a crazy stat for sure, but who, if anyone, has stepped up in his absence?

While the Revs don’t have an extra “magi” on the roster, they’ve still been scoring goals.  New England have scored 1.94 goals/game with Carles Gil and 1.83 goals/game without.

Carles was the master of key passes which have dipped since he left with an injury. In the last 6 games, key passes are coming mostly from Bou which you might expect.  The Argentine has contributed 16 key passes in 6 games. For reference Gil was averaging 4.4 key passes per game by himself. Next behind Bou is outside back Dejuan Jones with 6.  This further helps to explain the use of wide areas to produce goals in Gil’s absence.

Perhaps the best reason the Revs have been so able to weather the storm so far without Gil is because they have top tier talent in so many positions across the field.  Gustavo Bou and fellow designated player Adam Buksa both scored 2 goals during this period.  In Matt Turner they have a top tier backstop.  A tactical switch saw Tajon Buchanan move into Gil’s role on the field, and had produced some excellent results as well.

Without Gil, corner kicks and set pieces are a problem

One facet of Gil’s game that New England has not been able to replace has been his set piece prowess.  Bruce Arena has cycled through a handful of players to take corners and free kicks, none to particular acclaim.  Bou, Traustason, McNamara, and Boateng have all gotten a chance to take the role.  None have looked particularly impressive in the role.

In Saturday’s defeat against NYCFC the Revolution cycled through 3 corner kick takers.  Emmanuel Boateng took 4 corners, while Tommy McNamara and Gustavo Bou each took 3.  That’s not the sign of a team with a clear backup for that type of work.  It’s something they’ll need to sort out if Gil is to miss much more time.