On Sunday the New England Revolution clinched the top spot in the Eastern conference. This is important for many reasons. For starters, it ensures that they have home field advantage throughout the playoffs. They also now get a first round bye, automatically sending them straight through to the Eastern Conference semifinals come November.

As winners of the east, they’ve also guaranteed themselves a spot in the 2022 Concacaf Champions League, their first foray into international club soccer since getting embarrassingly bounced from the 2009 CCL tournament by Trinidad and Tobago’s Joe Public FC 6-1 on aggregate.  That’s less likely to happen this time around.

You may be wondering what masterstroke of tactical genius the Revs employed on Sunday to earn such an honor?  How many Bou-lazos did Gustavo hit in the first half?  Is the crossbar still vibrating from the force of an Adam Buksa header? Just who did New England defeat???

To answer that last question broadly; pretty much everybody!  The Revs earned their 20th win on the season on Wednesday in a 4-1 road thrashing of CF Montreal.  To give a more specific answer?  Nobody.  There were no tactics, no Bou-lazos, no goals at all, in fact.  New England didn’t play on Sunday.

In the end, “no goals at all” ended up being all the firepower the newly anointed Eastern Conference champs needed.  Second-place Nashville SC needed to win on the road in order to keep pace with New England and keep themselves in contention for the top spot.  Instead, they did what they so often do when playing good teams on the road; grinding out a slow, barely watchable 0-0 draw against NYCFC.  It was Nashville’s 6th 0-0 draw on the season, and their (league leading) 14th draw overall.

#NERevs officially clinch the top spot in the East, while #VWFC make a push for a final playoff spot in the East. #FCCincinnati, #CFFC, #TFCLive, #DTID, #HoldItDown and #Verde are all a single result away from playoff elimination. pic.twitter.com/7aqB64Om5V

That 0-0 result now ensures that Nashville can max out at 65 points, which is where the Revolution currently sit.  In a hypothetical scenario where Nashville wins all their remaining games and New England loses all of theirs, New England would take the top spot on a tie-breaker.

The Revolution have clinched top honors in the Eastern Conference, and have done so before any other team has clinched or been eliminated from the playoffs. They have the benefit of having played the most games of any team in MLS but have a staggering 11 point lead over Seattle in the overall league table.

Covid has forced the league to play an unbalanced schedule this season, meaning that teams are overwhelmingly playing opponents from their own conference. As a result, I’ve begun to hear whispers of a sentiment that Patriots fans will be all too familiar with. New England’s success is a result of them playing in an easier division. But is that true?

There at least one reason to believe that it is. In a limited number of inter-conference games played this season the West holds a 9-6 win advantage over the Eastern Conference. There are also 8 ties to round out the 23 game sample size. The Western Conference also has an edge in ppg earned with 1.386 ppg average. The east has an average of 1.349 ppg.

Outside of head to head comparisons, things look rosier for the East. In knockout competitions, the East has fared slightly better over the past year. Philadelphia made it furthest into the 2021 Concacaf Champions League bracket and Columbus won Campeones Cup against Cruz Azul a few weeks ago. Both of those teams lifted MLS trophies just last season, with Columbus defeating Seattle in MLS Cup. 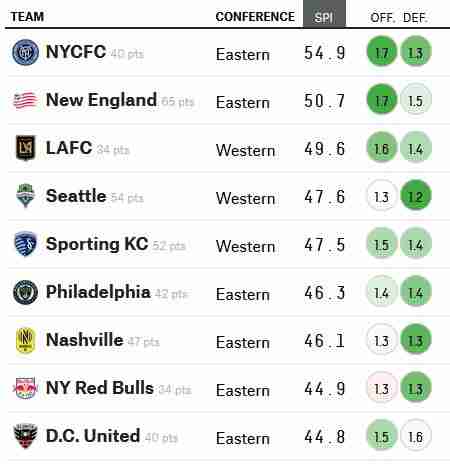 The Soccer Power Index algorithm at 538 (above) also favors the east with 6 of the top 9 in the rankings belonging to the Eastern Conference.  In the end, though, it won’t be algorithms that measure greatness.  With few head to head matchups remaining in the season, the Revs will be hoping that they get the chance to prove themselves against the Western Conference come MLS Cup.

It would be a mistake to gloss over the Revolution’s big 4-1 road win against CF Montreal last Wednesday, and not just because I caused it.

Coincidence that after @andrew_wiebe reads my question on @Extratime about the Revs only winning by 1 goal margins, they go out and grab a 4-1 W in Montreal?? I think not. You're welcome Revs fans ?#NERevs

Ok, so I’m clearly joking here, but it was good to see New England close out a game where they had a big lead.  New England’s calling card this season has been winning by a single goal margin, as they have done in 16/20 wins.  They got going early in this game and were up 3-0 by the 30th minute.

That’s when things turned Montreal’s way.  Just 2 minutes after scoring their 3rd goal, lazy defending gave Montreal a lifeline.  After that, the momentum began to change.  A familiar feeling began to creep in to the heads of Revs fans.  This could be another close game.  Not what you hope for when you’re up by 3 to start the match.

Fortunately for those same Revs fans, the next and final goal of the match would be for New England.

I want to give some love to Wilfried Kaptoum on this play.  He has been touted as perhaps one of the more disappointing signings from this off-season, but he does an excellent job on this play.  He recognizes there’s space to dribble through the lines and shrugs off a challenge from Wanyama before making the right pass to Gustavo Bou, who places it inside the far post.  He’s underwhelmed for his price tag, but more plays like that could see him work his way into the starting lineup for the playoffs.