Coming off their biggest win of the season in L.A, the Patriots don’t make any moves at the trade deadline and shift focus to the Panthers and former teammate Stephon Gilmore.

This past Sunday the Patriots picked up their first win of the year against a non-rookie quarterback. It was however their fourth win of the season and their fourth win this season against a rookie head coach. This Sunday Bill faces off against Matt Rhule in his second year in the league with the Panthers.

Fortunately, because of how the Patriots looked overall as a team last Sunday, upcoming games look a lot more winnable now then they did a couple weeks ago.

1st half: Could’ve used your three timeouts at the end to give yourself a better chance at scoring a touchdown or giving Folk an easier FG than 48 yards. Instead, they do three straight incomplete passes.

2nd half: You lose the first timeout with a challenge loss then burn the other two timeouts before getting to the last six and a half minutes of the game. 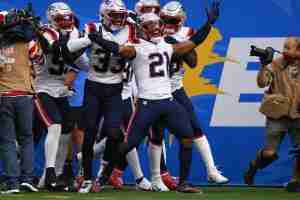 The biggest move in this years NFL trade deadline was the Rams getting Von Miller who’s only guaranteed to play for them this season and that’s it. Truly making it an all-in move for a championship this year which we used to not see a lot of in the NFL but is now becoming more of a popular mindset with some GMs.

I’m never surprised by what the Patriots do at the trade deadline every year whether it be nothing or a move that’s the biggest news in the NFL that week. So, when the deadline came this year, I thought they could totally do something, yet once it passed, I was not shocked to find out that they didn’t. 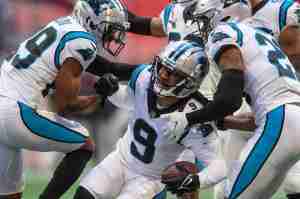 Patriots look to improve to 4-0 on the road entering Carolina as three and a half point favorites. Both teams are .500 so you know the winner of this game is going to feel pretty good about themselves at 5-4. If the Pats drop this one it would be such a step back after all the momentum they’ve picked up from winning two straight.

New England will be facing some familiar faces this Sunday in Sam Darnold, former division rival quarterback, and Stephon Gilmore, former star cornerback for the Pats. After seeing that negotiations went wrong with Gilmore and the Patriots and then knowing that ultimately he ended up taking less money to go play for Carolina, you should know how badly Gilmore is going to want to make an impact on this game.

It didn’t take him long to impact the Panthers, he had a game sealing INT for them just last week.

With Christian McCaffery injured, rookie running back Chuba Hubbard has filled in scoring 2 TDs in his last three games and averaging 68 yards per game in his last four.

The Panthers looked a lot better against the Saints and Texans than the Pats did. However, Carolina did get blown out by the Giants a couple weeks ago. They also have a couple close losses to Philly and Minnesota.

I can see this being another close game like last week was. There aren’t a ton of areas that I give advantage to either side here. I feel a lot more confident about the Patriots after last week and now expect them to win this game when I counted it as a loss earlier in the season. Yet if they don’t win, I’m really not going to be that surprised.