The Pats have built a nice winning streak with three in a row so far. How much longer will it continue?

This Patriots season looked at one point like it could possibly offer very little playoff hope. At times even a loss or two away from the season seeming to be over. But nothing fixes any of that better than a winning streak. Now no one is thinking they can’t make the playoffs now being halfway into the season.

Actually, If the season ended today New England would technically be in as an AFC wildcard team on tiebreakers. That doesn’t mean you should start feeling comfortable. It means your playoffs start now and that’s how this team and coaching staff has got to approach every game from here on out.

With the Bills somehow losing to Jacksonville this past weekend it makes you as a Pats fan feel good for two reasons. It showed the Bills can lose to bad teams, which I’m sorry but, we don’t know for sure this Patriots team isn’t yet. Point is Buffalo is very beatable and perhaps much more than we thought before.

The second reason is what the division standings look like now.

You can certainly win this division now. I really did not think that could be possible for this year.

The Importance of the Next Two Games

After hosting the Cleveland Browns this Sunday the Patriots will have to travel to Atlanta on a short week for a Thursday night game against the Falcons. This is going to be a very important 5-day span for this team. In a week from tonight this team could be 7-4, 6-5, or 5-6 heading into their bye week before having to play the Titans and Bills.

Losing this Sunday puts pressure on the Pats when they face a Falcons team that I think is better than a lot of people realize at 4-4 and coming off a win over their rival, the Saints. A Saints team that came into Foxborough and smoked the Patriots.

The Falcons may not be as much of a favorite in the NFC as the Pats are in the AFC but they aren’t a team to overlook. The Browns I think are kind of a question mark right now at 5-4 but I think the Pats are sort of a question as well at this point. It makes this Sunday a great test for a New England team that hasn’t done so well at home so far this year.

After these next two games is your bye week so having a good record going into that will have you feeling really good as well as having extra time to prepare for one of your hardest opponents all season in the Tennessee Titans. The extra time for Bill and the Pats make that a winnable game given Vrabel and the Titans won’t have the extra time off and while they’re playing the Saints this weekend which is a tough game, the games they play before and after the Patriots are against the Texans and Jaguars.

Given the weak competition they could absolutely be playing down to low standards at that point if they overlook this Patriots team which is possible since I’m sure they feel confident against them based on the success they had in their last matchup (Brady’s last Patriots game). Not to mention they lost their star running back for the season.

If you can win at least two more games going into the first Bills matchup December 6th in Buffalo on Monday night, then you’ll likely be in a position to be at the top of the division with a win in that game. That’s only possible if they continue to build off their recent success and take care of some business in the next few weeks. 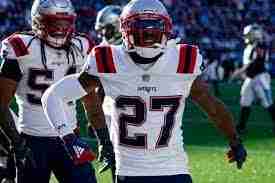 The Questionable State of Mac Jones

Can you say that Mac Jones is really “mistake-free” or even having good games in these wins? I don’t think so. I mean is he just not getting a lot of open looks which is what’s poorly reflecting his numbers? Therefore, he’s possibly avoiding a lot of mistakes. Maybe he’s just off but stats really don’t matter when you’re winning games so how can I question him when he’s 5-4 right now as a rookie quarterback?

However, watching him every week I don’t think you can say yet that he is consistently getting better or that he even looks better at all. I’ve heard some describe his play as of late to have plateaued. He’s faced some fast defenses in the past couple weeks so it could just be that he struggles with or maybe he’s getting a little fatigued dating back to last year at Alabama and getting a lot of reps this preseason. Possibly just a mid-season slump that will go away but until it loses you games, then who really cares?

Are These QBs We’re Playing That Bad or Are We That Good?

You have to account that Darnold was really bad this past Sunday with some ugly INTs and even missing an open McCaffrey on one play where all he had to do was lob it but instead drilled it into Barmores hands. Besides Herbert the wins this year are against Sam Darnold, Davis Mills, and two against Zach Wilson. But if you beat Baker this weekend then I think that answers this question for good.

The recent changes on the defensive line with moving Godchaux to the end, taking Wise off the field and putting Carl Davis at nose. I thought it worked great in killing the Panthers run game which is exactly what the Pats needed to do to win this game hence how they forced Darnold into having an awful game.

Some of these 4th down decisions really don’t make any sense to me at all. This past Sunday you’re up 24-6 with 8 minutes left in the game and you go for it on a 4th and two, granted they got it, but why not go for 4th downs in actual high-pressure situations that can win you close games. No, instead why don’t you just do it when it doesn’t matter at all.

My Message to Fans

Dear fans, please manage your expectations right now. Don’t expect this to be 2001 all over again no matter how much Tedy Bruschi wants to remind you that he feels like it is.

Just enjoy the ride as it is and enjoy every win whether you should’ve won or it’s an upset. But we’re no longer in the era of the Patriots being AFC championship win or bust every season. If this team can win a playoff game or even a division title, great year in what many or at least I thought was somewhat of a rebuild year a few weeks ago, instead you can look at it as more of a growth year than a rebuild year.

Just be happy that they’re now players in the AFC again and truly in the playoff hunt. What’s the cap for this year’s team? I’d say winning the division and winning a game or two in the playoffs but what’s just as important is they set themselves up this offseason for next year which seems like could be a huge year for this team as of right now… given they play their cards right.

No one likes hearing about next year especially in the middle of a competitive year. But you’ll feel better when you accept that next year is the super bowl year and this year is just the year that we get back to being in the discussion again.