The Pats improved to a 4-game winning streak after they routed the Browns last weekend. Their longest since starting 8-0 in 2019. They’ll look to make it 5 straight in a few hours.

It looks like the Patriots have come a far way from when they were a 1-3 team barely beating the Texans with zero good wins on the year. Then they lost a game to the Cowboys that felt like it was right there for the taking. At 2-4 with no good wins and two close losses, I thought this team would end up with 7 wins on the season. Well, they’re about to go for their 7th win tonight in week 11 before even reaching their bye week.

But this team looks nothing like they did when we were all evaluating them earlier in the year. They showed glimpses of hope but not many can honestly say they expected this. We were hoping for improvement and ended up getting a lot more than just that. We ended up getting a real, true contender in the AFC.

After everything this team has done in the past month and being as hot as they are right now, they can’t let a motivated team that they’re better than get the best of them this week in the Falcons. Now is not the time for this Patriots team to cool down. 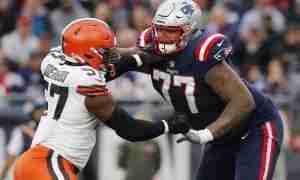 With this offensive line looking like it was intended to be (Wynn, Karras/Onwenu, Andrews, Mason, Brown) everything now seems to be going nicely according to plan in the offense. The biggest factor was the return of Trent Brown who played like the $9 million contract man that he is.

The O-line was absolutely the difference in this game. Mac Jones saw zero pressure all day in front of one of the best defensive fronts in the league. Mac was probably the least pressure he was all season and the passing game reflected it.

A lot of that is due to the success on the ground which opened up the field for Mac Jones and his receivers. The run game worked tremendously even without the help of Damien Harris. Rhamondre Stevenson looked phenomenal ending up with 2 touchdowns and 100 rushing yards.

Big decision for the Pats now on what they should do with Onwenu vs. Karras. Onwenu started the season at LG but this past Sunday was relegated to a rotational role at RT with Brown. If he continues to be the 6th man lineman he’ll get less time from here on out but it’s possible we see him take his LG spot back from Karras. 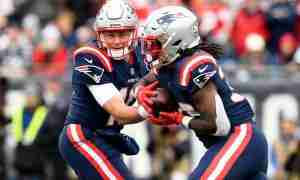 It was a great day on third down for both sides of the ball. The offense went 7 for 9 on third and the defense stopped the Browns on 10 out of 11 third downs. But you can just look at the score board to be able to tell that this was easily the best game of the year for the Pats in regards to execution.

Clear adjustments were made on defense after allowing Cleveland to score on their opening drive since they went on to shut them out the rest of the way. Meanwhile the offense just had their way with this Browns defense all day, punting just once on their 8 drives, averaging a time of possession of 4:42 per series with nearly a 10-minute drive in their first offensive series of the game. 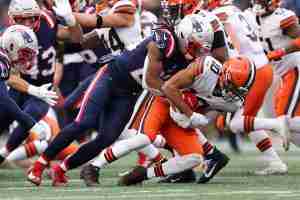 Take Credit for the Win. But Still Take it at Caution

You can’t ignore some of the Browns mishaps in this one but by no means are the Browns a bad team right now. You should take pride in making a good team, especially a good defense, look pretty bad.

I think overall this was less of the Browns having a bad day than it was the Patriots exposing them but things rarely go as perfectly as they did this past Sunday when you play talented teams like Cleveland. So what’s that mean for New England and how real is this Browns team?

This game played out as if everything went according to the New England’s game plan. The defensive coverage made Baker Mayfield uncomfortable and forced him into some mistakes. He also got beat up pretty good and ended up leaving the game late in the third quarter with a contusion in his right knee.

The Pats success with execution means that at the same time Cleveland struggled executing all around on Sunday. Don’t forget that Nick Chubb didn’t play who’s been one of the most explosive running backs in the league this year and surely would’ve been a difference maker in this one. Yet probably not a 40 point swing difference maker but he still would’ve helped them a bit.

The Browns are now 5-5 and have the Lions this weekend which should be a win. Then the following week they play the Ravens which will be a good test for them. How they look after the next couple weeks should tell you more about this team and how good of a win this really was or if the Browns are somewhat of a fraudulent team this year. 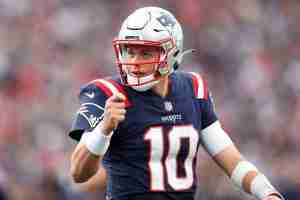 Mac Jones Ends his “Plateau” – Gets Back on Upward Curve

This might’ve been Mac Jones official break out game. He looked great as he spread the ball all day, completed some long balls and even a couple dime passes. His arm strength looks solid and he looks a lot more comfortable now in the pocket obviously without all of the pressure he was getting before so without that pressure he looks more like a year 2 QB than a rookie.

He even made some great plays by using his eyes to fake out defenders including a touchdown play that Dan Orlovsky broke down on Twitter and on ESPN the following morning.

Cmon this is Art pic.twitter.com/UqRXZfrB1N

Those kind of plays make you look like you have more NFL experience than you really do and fans love to see that. That’s why it’s tough not to be excited or at least a believer in this rookie QB. 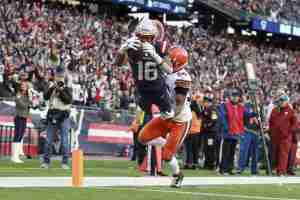 Jakobi Meyers finally got into the endzone for the first time in his career last Sunday. It was a great moment since once he did the entire team joined in to celebrate with him there at the Patriot Place gate side right in front of the end zone militia. He had 1,522 receiving yards going into that game which was the most by any player without a touchdown in NFL history.

After playing in 38 regular season games the 39th one is sure to be one Meyers will never forget scoring his first ever touchdown on his 135th career reception. He really was the best receiver in the league to never score but I’m sure he’s now happy he can’t say that anymore.

Sure, it may have been the last TD of the game which made it 45-7 but a touchdowns a touchdown and while they really could’ve used that one that was called back earlier in the season, this will do just fine for touchdown number 1. And hopefully the first of many now. It was a good day for Meyers as he ended up with 4 targets, 4 rec, 49 yards and 1 TD. Bourne looked great as well with 4 targets, 4 rec, 1 TD, and 98 yards. 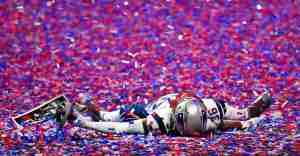 A lot of fans and even some national media members are saying the Patriots are now a favorite in the AFC again and branded as a “super bowl contender” or “dark-horse pick” who will likely be in the big game if not this year then very soon. Is that an overreaction?

I don’t think resume hurts that optimistic talking point too much either since you have competitive losses to Tampa Bay and Dallas. Close losses to good teams mean a little more when you’re comparing resumes to other top AFC teams. It doesn’t mean as much when you’re just talking a path to make the playoffs.

But this weekend helped with the ‘good wins’ aspect of that resume when you look at how they were able to be in complete control over Cleveland for really the entire game and even the Panthers win over the Cardinals this weekend makes you look better now. 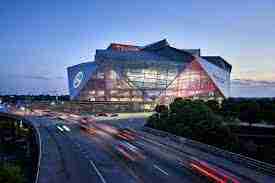 An Important Night in Atlanta

You’re currently the only team undefeated on the road in the AFC (4-0). The Cards are 5-0 in the NFC and you have a chance to tie that on Thursday. But what’s more important is improving to 7-4 and having the second most wins in the AFC, at least until this weekend, going into an extended bye week since it follows a Thursday night game. The Pats deserve a break but can’t get too comfortable since they have some big games afterwards.

Last week I said you wanted to win at least one of these next two games (Browns, Falcons) but considering that you beat up on the browns that badly and you’re a good road team, I think losing this Falcons game would be bad to sour all the positive momentum and attention you’ve been drawing the past few weeks. That’s not to mean it would be a bad loss because I do think the Falcons are better than what they showed against the Cowboys last weekend in their blowout loss.

Atlanta will probably come out pretty fired up and motivated following an embarrassing loss and now being at home in a primetime game.

This is the Falcons only primetime night (Thu/Sun/Mon) game of the year and with a 4-5 record it’s one of their biggest games of the year for keeping their playoff hopes alive. Based on how good the Patriots look lately I can’t pick against them but I wouldn’t feel that comfortable betting on a team that’s won 4 straight going against a team playing for their playoff lives.

The Pats cannot overlook this game and I think it is a lot more crucial to this team’s playoff hopes than most fans realize. Fivethirtyeight.com projects that the Patriots now have a 74% chance to make the playoffs. Winning on Thursday jumps that to 83%. Losing drops it all the way down to 56%.

Don’t let the rest of the league start getting comfortable now.