If you’ve been a fan of MLS and the Revs for more than a few years, tomorrow’s Expansion Draft should feel familiar to you.  With MLS growing year over year, such drafts have become commonplace.  Over the past 10 years, only 2014 and 2016 saw NO new team enter the league.  They’ve added 12 teams since the beginning of the 2011 season.  In 2021 Austin was added.  In 2020 it was Inter Miami CF and Nashville SC.  2019?  Cincinnati.  The list goes on.  With all of these new teams come empty rosters, looking for talent.  Enter the expansion draft.

If you’re not yet familiar with the expansion draft, you will be given many opportunities to learn.  MLS is adding a team in 2022, 2023 and looking to add another team somewhere down the line.  The lucky contestant entering the league in 2022, one that continues the trend of boring names, is Charlotte FC.  A football club based in Charlotte, North Carlolina.  Lovely.

“I think this year will be the most interesting Expansion Draft in the history of MLS.”

So what is the Expansion Draft?

Expansion teams have a lot of work to do in order to fill the (up to) 30 roster slots afforded to them by the league.  In order to facilitate this logistical burden, MLS gives new clubs a few distinct advantages.  Expansion clubs are given extra Allocation Money in order to help complete transfers and trades, they are given the top spot in the MLS Superdraft, and they get to make use of an expansion draft to obtain quality depth.

The expansion draft serves as a mechanism for new teams to fill up their roster with talent, selecting players from other existing MLS rosters.  The rules look like the following:

Who were protected by the Revolution? Who were left exposed?

MLS released a full list of the vulnerable players earlier today.  They did not, however, include a list of those players that were protected.  Given the list of players available for selection, and knowledge of those that were automatically protected, I put together the below lists. 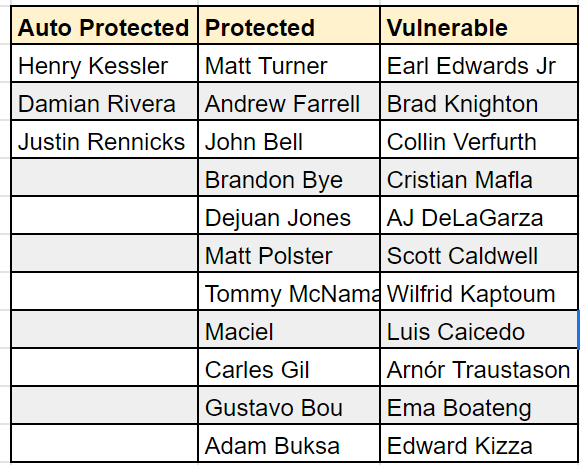 New England has protected all three of their designated players.  This is a clear choice for the Revs who had one of the best DP trios in the league.  Carles Gil contributed a league leading 18 assists and both Buksa and Bou put up solid goal numbers with 16 and 15 respectively.

spent too much time doing the research into this for an article so pls tell me it's interesting or at least give a take:

Added up the goals + assists by MLS DPs this year, sorted by teams.

Another obvious choice was to protect the entire starting back line and goalkeeper.  Matt Turner won MLS Goalkeeper of the Year and, while he’s hinted at a desire to play in England, he is nearly irreplaceable in net.

The Revs are relatively thin at center back with only 3 natural CBs on the roster.  Kessler was automatically protected as a Generation Adidas player. Losing either Farrell or Bell would hurt, especially when New England should be focusing on adding pieces to central defense.  Bye and Jones both had solid-to-exceptional seasons playing as outside backs in 2021 and they make absolute sense to protect.

Polster was a huge part of the Revs success at defensive midfield this season.  He was by many accounts one of the best at the position this season. Meanwhile Maciel was productive as a spot starter on a team friendly contract, and McNamara worked his way into the starting lineup by midseason as a reliable presence in the midfield.

From a player standpoint, it’s less about who was protected and more about who wasn’t that is somewhat confounding.

Doing a quick count of the protected players above, you might notice that there are only 11 names. This is odd since teams can protect up to 12 players. There may be an accounting error or something happening behind the scenes, but if true that’s a damning indictment of the names on the unprotected list. That none of those players were deemed important enough to warrant protection over literally nobody speaks volumes about their place in the roster.

Players In Danger of Selection

Boateng was probably the most effective in 2021 of the players on the unprotected list.  He put together 2 goals and 4 assists in just 13 appearances.  Frequently used as a sub late in games he provided some speed and energy off the bench.  He was also responsible for the assist to Tajon Buchanan in the dying minutes of their playoff loss against NYCFC. His $200K salary is also a good value for a veteran contributor.

Still a sore subject but for anyone who was wondering what the atmosphere was like after Tajon’s goal, this was from the NYC YouTube channel #NERevs pic.twitter.com/NhQNK5HozP

Delagarza didn’t end up playing many minutes for the Revs this season.  Still he represents a solid MLS veteran defender who can play across the back line.  He’s also a good locker room presence, and is on a cheap $250K contract.

Caicedo is another option that didn’t play a lot in 2021.  He sustained an injury at the beginning of the 2020 season that sidelined him for all of 2020 and much of 2021.  By the time he was back to full health, he’d tumbled down Bruce Arena’s depth chart.  This shouldn’t erase the fact that he was very good in 2019 when he was healthy.  At $350K in salary he’s a bit of a gamble, but if he can regain his form it’d be a boon for Charlotte’s midfield.