It was a week without Revs soccer.  The FIFA international break for World Cup Qualifiers took center stage in the US this weekend, with only 6 MLS teams opting to play league matches.  Former Revolution forward Tajon Buchanan made the most of his opportunity with Canada.  He scored a goal and provided an assist in the match that officially qualified them for their first World Cup since 1986.

It was a mostly good week for the US, as well.  Gregg Berhalter’s men earned a draw in Mexico before returning home and routing Panama 5-1.  This puts them on the precipice of qualifying for a trip to Qatar this winter.  Absent from that US victory, however, was any hint of the New England Revolution.  Matt Turner, Sebastian Lletget, Henry Kessler, and Dejuan Jones have all been called up recently by the USMNT.  None of them were on the roster for these pivotal matches.

Lletget has had a good start to his Revs career, but plays a position of strength for the US.  Dejuan Jones is a rising star, who hasn’t quite made himself a part of Berhalter’s plans.  As for the other two, a recent check of New England’s most recent line-ups shows that injuries have limited their availability.  A further check of the team’s recent score lines should indicate just how important they are to the Revs.

One silver lining to Matt Turner’s injury is that it has given the team some time to test out their depth at goalkeeper.  Turner will be leaving New England to join Arsenal this summer, and as a result Bruce Arena has the difficult task of replacing the best goalie in the league.  Thus far, he has done so by using 30 year old Earl Edwards Jr, giving him the start in all 6 matches they’ve played so far this year.  International duty for Turner last summer gave us a similar 6 game look at 37 year old Brad Knighton.  Has either goalkeeper done enough to earn the nod as “full-time starter” in June when Turner leaves?  Let’s take a look at their stats and tape to find out.

The Case for Edwards

This whole debate really should come with a huge asterisk.  6 games is simply not enough data to really make a strong statistical case for anything.  With the sample size so small, things like lineups and opponents can really factor into how many and what quality shots a keeper may face.  This is especially true for Earl Edwards who had to contend with this just a few weeks ago in Mexico City. 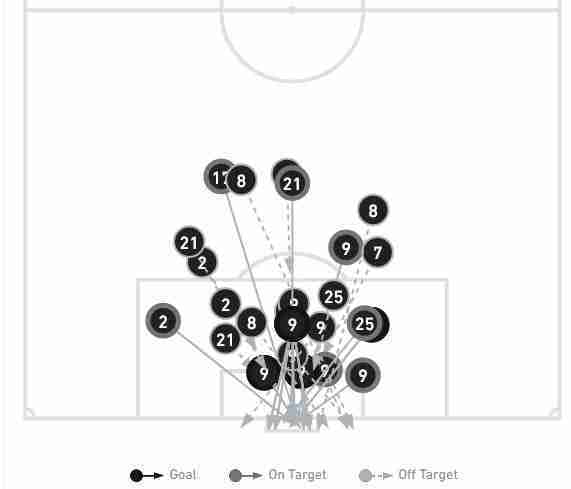 Not even an 8 save match (not including an additional PK save) could save him on an evening where his defense allowed a whopping 25! shots.

Another caveat to mention is that, while I will use American Soccer Analysis’ expected goals model for most of this, it was not available for the Revs CCL matches against Pumas.  It’s not best practice, but I will be combining some OPTA xG data with the ASA data to complete the set.

Let’s begin by using Matt Turner’s 2021 stats as a benchmark.  His production is what will need replacing, so it makes sense to use that as the comparator.

Edwards stats include a pair of snow games and a pair of tough road games with their best center backs missing from the roster.  It shows.  Edwards has played less than a quarter of Turner’s minutes from last season, and has already faced a whopping 50 shots.  With small sample and tough opponents, we perhaps shouldn’t take a ton away from the 11 goals conceded.  That said, using GA/xGA, we can begin to parse out whether or nor Edwards is making the types of saves that are expected from a starter in MLS.  By the metrics, he’s allowing goals at a slightly higher rate than an average keeper.  What’s more, he’s not very close to replacing the shot-stopping ability shown by Matt Turner during his tenure in New England.

He has made a few spectacular saves, including this one from point blank range against PUMAS:

But he has also been somewhat slow to react on a few occasions including this goal conceded to Charlotte.

The Case for Knighton

Once again, I will use Turner’s stats from last season as a benchmark.

We can see that once again, the sample size is small.  Knighton only allowed 6 goals during his 6 match fill in for Turner last season, though that was behind a much more settled defense.  He has a positive value at GA-xGA indicating that he allowed more goals than expected.  Per GA/xGA he did so at a rate of about 1.17 goals allowed per 1 goal expected from the average keeper.  This is actually, believe it or not, ever so slightly worse than the 1.16 figure for Earl Edwards Jr (despite allowing 5 more goals in similar minutes).

Knighton has been a serviceable backup, but advanced analytics still put him well behind Turner in terms of value added.  He very well may end up being the best option, as he does have saves like this in his repertoire:

Big save from Brad Knighton 🚫on a 🚀#NERevs // #PORvNE pic.twitter.com/apdT9Ku0CN

He is also getting up there in age, however.  At 36 it’s reasonable to question how much longer he can continue to play at this level.  While he’s usually very consistent, he’s also occasionally responsible for moments like this:

The Case for Others

A while back, the good folks at the Bent Musket put out an article detailing some external options to replace Turner in June.  These included then Minnesota United backup Dayne St. Clair, USMNT backup Ethan Horvath and DC United’s Bill Hamid.

It was reported that New England actively pursued at least two of those players over the winter, reaching out about both St. Clair and Horvath.  Since then both players have seen their stock rise at their respective clubs.  St. Clair, already rumored to be a pricy option, has seemingly usurped Tyler Miller for the starting job in Minnesota. As he plays within the league, he could be purchased for allocation money, though how much remains to be seen.

Ethan Horvath has also begun to show out for Nottingham Forest, earning a start in each of their last 5 matches.  He was already listed with a market value of $1M on transfermarkt, and with his recent success it could rise even higher.  His contract runs through 2023, and as such a transfer fee would likely be involved here.

As for Hamid, he’s no spring chicken at 31 and his stats to date in 2022 are much more the Edwards/Knighton variety  than the Turner variety.  He’s only allowed 4 goals through 4 matches, but his 1.20 GA/xGA is higher than either Revs backup.

These options should underscore the dilemma facing Bruce Arena.  Matt Turner’s don’t grow on trees.  The cheapest option would be to roll with the players you already have, even if they’re not as good.  The players with comparable shot stopping numbers could carry a hefty price tag.  Spending up on designated player level goalkeepers hasn’t exactly been a winning strategy in MLS so far, but if you’re going to come close to replacing the value Matt Turner provides, it may be the only option.

What do you think?  Do we roll with Edwards and Knighton?  Trade allocation cash for an MLS player?  Or do we roll the dice on the international market?