Thursday, February 2nd, 2023
THE LATEST
Home Revolution 3 Stats That Have Defined the Revolution’s Season So Far

The New England Revolution are a quarter of the way through the MLS season.  Ok… technically we reached that point at halftime of the Revs 2-0 victory over Inter Miami CF on Saturday.  It was a win that the Revs sorely needed.  With a loss the previous week at DC United, New England wanted to begin their 3-game home stand on the right foot.

And boy did they ever.

Yup.  That’s 19-year-old homegrown midfielder Damian Rivera scoring in the first minute of his first career start.  In so doing, he became only the 3rd ever to manage that feat in MLS history.  Things would only continue to go NE’s way from there.  A pair of early injury substitutions for Miami left them short of options in the second half, which saw both of their center-backs sent off for second-yellow ejections.  Adam Buksa would get his head on a Dejuan Jones cross in the 64th minute to double the Revs advantage and ensure vengeance for their 3-2 loss in Miami earlier this season.

And here’s the Adam Buksa goal that made it 2-0 Revs over Inter Miami (sweet feed from DeJuan Jones #apple) #NERevs pic.twitter.com/2yBw5mUKTj

While things worked out in this game, it hasn’t always been smooth sailing for New England.  Here are 3 stats that have defined the Revs season.

Sorry if that highlight brings back bad memories for Revs fans, but that goal is at the heart of one of the most telling stats of the Revs 2022 season.  New England has conceded 7 goals within final 15 minutes of matches so far this year. 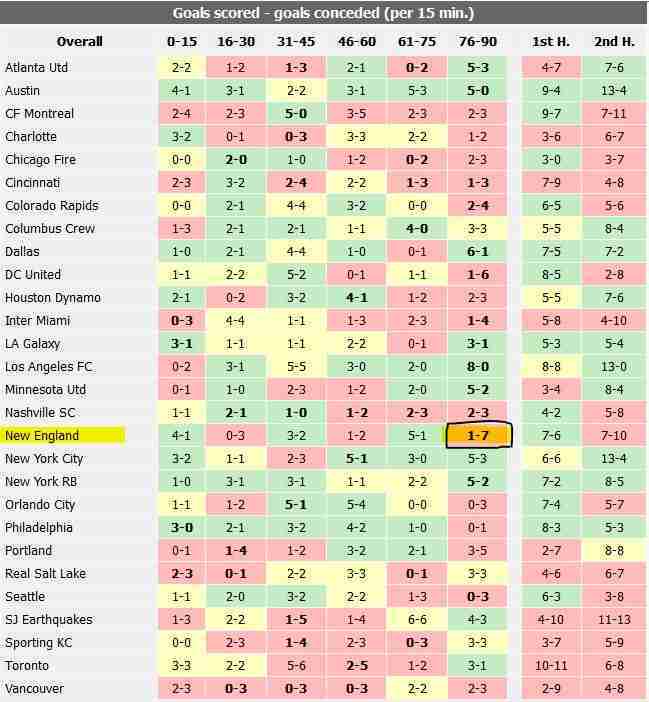 That is the highest number allowed of any team in MLS.  Only DC United have conceded anywhere near as many in the closing minutes, and 3 of their 6 came all at once in a total collapse vs Austin earlier this year.  New England have seemingly been inventing ways to lose games late, coughing up late winners against RSL, NYRB, and this one against Miami in April.

89' | Campana with the HAT TRICK! #InterMiamiCF take the lead at #DRVPNKStadium 🤩 #MIAvNE | 3-2 pic.twitter.com/oD0KDGQeGP

I’ve mentioned it before, but it bears repeating.  The Revolution like to cross the ball.  I mean, they really like it.  In fact, no team has sent in more crosses this season than New England. 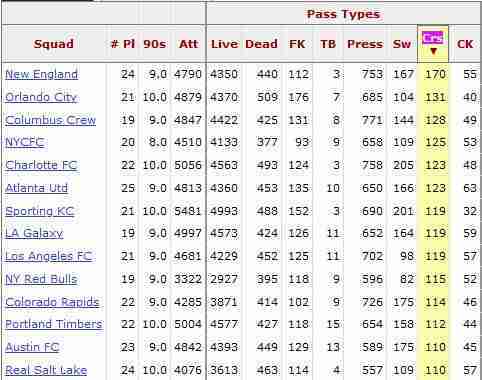 The Revs are crossing at a rate well above the rest of the league.  The average MLS team has attempted 105.8 crosses so far.  New England has attempted 170.  Without Tajon Buchanan, who departed in the off season for Club Brugge, speed and width in the attack comes from the fullbacks.  Both Brandon Bye and Dejuan Jones spend a lot of time in the Revs 4-4-2 diamond formation, bombing up the sidelines to advance the ball into the attacking third.  As a result, both fullbacks are leading the league in terms of crosses played into the penalty area. 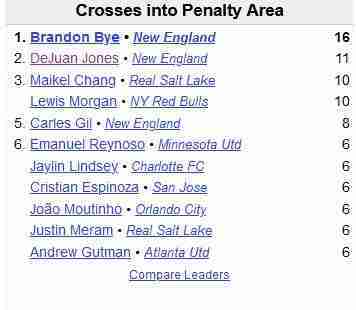 Given striker Adam Buksa’s proclivity for scoring headed goals it’s no surprise the Revs have taken this approach.  While it’s been working in recent weeks (Buksa has 3 headed goals off crosses in the last 3 games), it has made the Revolution somewhat more predictable in the build up this year.  The loss of Tajon Buchanan has made the Revs less dynamic on the dribble.  Per ASA, the Revs add fewer goals on the dribble than all but 4 other teams. New signing Borrero may someday help with that, but for now New England fans will need to hope for more of these.

Got his head on it 🧠 pic.twitter.com/0VI3sTxKSR

Revs have already racked up as many losses as they had all of last season.

If #NERevs fail to come back in this one, it will be their 5th MLS loss of the season. It took until the final game of last year, in a match where the Revs had nothing to play for, for the team to reach 5 losses.

I went out in search of stats that could explain this fact.  I figured if they were losing that often, there must be something fundamentally not broken, and in a way that would show up on the stat-sheet.

What I found was, surprisingly, nothing.  Nothing glaringly obvious, anyways.  The cross numbers are too high, and they don’t do a great job of getting pressure to the ball.  Other than that, the Revs seem to be doing alright from a stats perspective.

So if the stats look ok here, what’s going on?

I don’t usually buy into the idea that over/underperforming your expected goals is an indicator of how lucky/unlucky you are.  As an example, sometimes teams that consistently over-perform their xG do so on the back of a highly efficient striker.  However, even with that in mind, I think it’s ok to say that the Revs overperformed their numbers last season.  Heck, even Bruce said as much.

If the Revs played better than their numbers indicated last year, they’re seemingly doing the opposite this season. 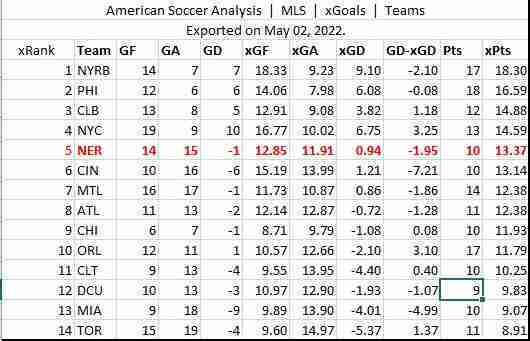 Even during this tough run of form New England has managed to win the xG battle more often than not.  Using the xG and xGA for each team in each game, the Revs move up to a respectable 5th place in the Eastern conference.

What has stopped this fantasy from becoming reality is a brutal GA-xGA number of 3.09 goals conceded above expectation.  With a healthy defense and Matt Turner back in the fold, maybe there’s some hope that New England can start trending towards meeting (or dare I say exceeding) that xPoints, and begin to climb the actual table.