Most fans would agree that this season hasn’t gone as well as the Revs had hoped.  Coming off of a record-setting 2021, New England seemed poised to continue their form into the new year.  Expectations from fans ranged from CCL contenders to a team solidly in the MLS playoff picture.  Hopes remained high even after losing one of the most explosive attacking talents in the league, Tajon Buchanan, to Club Brugge over the winter.

He’s fine, in case you were wondering.

Unfortunately, back in New England, things haven’t gone as anticipated.  Last year, the Revs were a team that were nearly as efficient on the road as they were at home.  They won an astonishing 10 of their 17 away matches in a league with a strong sense of home-field-advantage.  The next best road team in the Eastern Conference last season had 5 road wins, only half as many.  That’s why it’s been so disheartening for Revolution fans to watch this team this season blowing lead-after-lead on the road.  New England had lost 5 of 7 road matches headed into this weekend.

That plus the lineup changes left some of us feeling uneasy.

Those fears were put to bed on Saturday, as the Revs finally got a win outside the friendly confines of Gillette stadium.

Last week, I wrote about the star-players that were carrying this team.  This week I think it’s time to shine the spotlight on the underappreciated members of the roster.  The role players, the substitutes, the benchwarmers.  Yes, the stars were still important, but these players were the difference in Cincinnati.

I feel sort of bad for Sebastian Lletget.  Take a quick look at Twitter or Instagram comments after any Revs game and you’ll inevitably find a few DaBoy ™ haters.  While there are certainly valid criticisms of his game, I think sometimes he’s judged unfairly.

This off-season, Bruce Arena decided to add more veteran savvy to New England’s roster.  He did so by bringing in players he had worked with before.  In addition to Lletget, both Jozy Altidore, and Omar Gonzalez reunited with their former coach.  These moves earned the 70 year old manager a fair bit of criticism.  None of these signings are particularly young, and all of them are coming off underwhelming seasons for their previous clubs.  Add in a 4 game losing streak, and 22 goals conceded and it’s no wonder all three of these players have been the subject of Revs fans anger.

Is that anger, at least the anger directed at Lletget, well founded?

The scissor kick goal says ‘no’.

Clouding the issue somewhat is that Lletget was nominally brought in to replace Tajon Buchanan on the roster.  Through 12 matches, Lletget has 2 goals and 3 assists, which puts him on pace for roughly 5.66 goals and 8.50 assists by the end of the season.  That would be 14.16 goal contributions over the course of a full season, slightly better than the 13 goal contributions (8g 5a) from Buchanan in 2021. As a caveat, Lletget is on pace to play far more minutes in ’22 than Buchanan did last year.

Tajon is, by all accounts, the more electric player.  He created danger with his speed, shooting, and dribbling.  That’s not the type of player Lletget is, and the stats back that up.  He only has 8 successful dribbles so far in 2022, which puts him somewhere around half the pace set by Tajon in 2021.  Likewise his 0.2 g/90 is under half the pace of 0.41 accomplished by Buchanan.  Interestingly, however, his projected 62 shots puts him on pace with the Canadian (61), and he even has a significantly higher shooting percentage (46% on target vs 38%).  Where he really excels is with his passing, where his 87.7% accuracy is second best on the Revs and miles ahead of his predecessor’s 79.9%.

They’re different players, certainly, but don’t let the memory of Tajon (or the fog of Omar Gonzalez) cloud your impressions.

As you may have gathered from earlier in this post, the Revolution were without the services of the always dependable Matt Polster in this game.  He missed the match after accumulating too many yellow cards over the course of the season.

Deputized in his place was the former La Masia product, Wilfrid Kaptoum.  Kaptoum has been inconsistently used in his 1 and 1/2 seasons in New England.  The Cameroonian central midfielder had only managed 90 minutes over 4 appearances through the first 11 matches of the season before getting the start on Saturday.

He certainly had some big shoes to fill with Matt Polster earning praise as one of the best central midfielders in the league.  Given the teams messaging about the importance of winning on the road, the pressure was certainly raised.

Kaptoum handled that pressure admirably.  He was all over the field, covering tons of ground and helping the Revs retain and recycle possession.  He only ended up playing 64 minutes, leaving during a double substitution that saw the introduction of new signing Dylan Borrero.  In that time he amassed 3 interceptions, 4 recoveries, and won 2 tackles all while contributing 92% passing accuracy in the midfield. 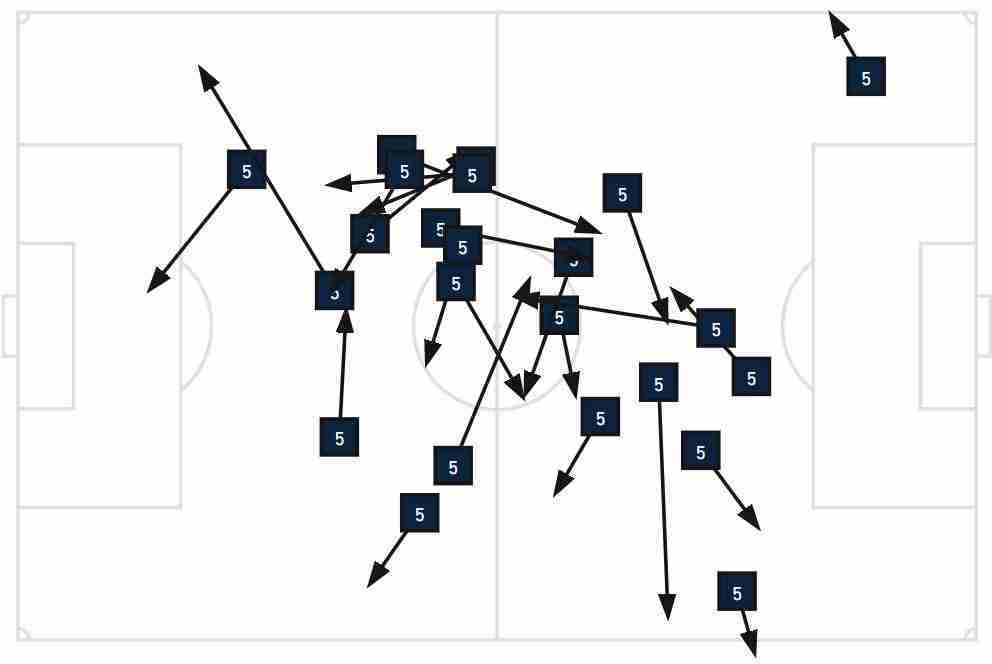 While he wasn’t a revelation, he was more than solid on a night where the Revs were missing key defensive starters.

Bye had a great game, but less for his defensive actions and more for his contributions to the offense.  He contributed his first multi assist game of his career, connecting with Lletget, Buksa, and MacNamara.

He contributed 3 assists on 4 key passes while still managing 6 recoveries and winning 83% of his team-high 12 duels.

For a while, Bye has been thought of as a solid defender who, while good at getting into the attack, lacks a consistent final ball.  The fifth year pro has never had more than 3 assists in a season, and from his rookie season in 2018 through last year, he had 8 total career assists.  He’s already connected on 4 assists in league play in 2022, and 6 assists in all competitions.

Could this be the breakout season we’ve all been waiting for with Brandon Bye?

Tommy Mac is here exclusively for the game winning banger.  Don’t get me wrong, he played decently well.  He was partially at fault for Cincinnati’s first goal, but he more than makes up for it by stealing all 3 points for New England with this shot.

In each of the previous two games, MacNamara has hit the woodwork late in the game with the score all tied up.  Eventually it one of those chances was going to have to go in.  I think we’re all glad one finally did.