It was a bit of a mixed bag this week for the Revolution, who travelled to Canada for a 3 game road trip this week.  It began with a 2-2 draw against a resurgent Toronto FC on Wednesday.  New England rolled out a 5-man back line, hoping to limit TFC’s new trio of Italian superstars.  In the end it would be just enough, with the Revs using goals from Tommy McNamara and Justin Rennicks to cancel out goals from Bernardeschi and Criscito.

The Revs traveling faction then went straight to Montreal for a Saturday bout vs Club de Foot Montreal.  Things didn’t go nearly as well for Bruce Arena’s team in Quebec, with the Revs losing 4-0.  Rommel Quioto ran by, through, and around the Revolution defense scoring a pair of goals and assisting on a third.  A late penalty called (incorrectly) against Omar Gonzalez gave CF Montreal the opportunity to pad their goal differential a bit, and ensured the Revs would leave Canada with a sour taste in their mouth.

Instead of looking at these games individually, lets try to glean what we can from the road trip as a whole.

The Revolution have been missing many key players for a while now.  In fact, the list of injuries has continued to grow.  We’ve known about Bou and Borrero, but it seems each week we add another name to the list.  Add in non-injury related absences and… well some of us weren’t feeling so confident earlier this week.

If the #NERevs are heading to TOR without Bou, Borrero, Vrioni, ITS, Polster, Maciel, and Kessler… after offloading Lletget, Altidore, and Traustason…

What has made these injuries so hard to take, for many fans, is the total lack of transparency from the team with regards to the how long players could be sidelined.

Bou before his most recent injury, was on an absolute tear.  He had scored 7 goals and added one assist in his 8 healthy games this summer.  Dylan Borrero had a pair of goals and an assist in his 9 healthy games.  Giacomo Vrioni was signed to take the place of prolific goal-scorer Adam Buksa, but has made just 2 appearances.  These aren’t the only goal-scorers not available for the Revolution.

All told, just over half of the Revs goals this season have come from players who were injured, traded, or unavailable for these games in Canada.

The unavailable portion of that sentiment refers to Henry Kessler who was unable to make the trip due to his vaccination status. You can make your own decisions as to how you feel about that information, but it’s undisputed that his unavailability changed how the Revolution were able to play.

No literally, who is this?  With so many players out for this road trip, there were some new faces in the starting XI.

For most of the season, Bruce Arena has preferred either a 4-4-2 or a 4-2-3-1.  The 4-4-2 diamond allowed Arena to get his 2 DP strikers onto the field at the same time, while also getting Carles Gil into his best position.  The downside to this formation is that it relies heavily on a single D-Mid to put out all the fires.  The 4-2-3-1 on the other hand, provides some defensive help in the midfield, at the expense of losing the extra striker in the attack.

Bruce Arena didn’t use either formation in Canada.  He opted for a 5-4-1 in Toronto, and a 4-3-2-1 “Christmas Tree” in Montreal.  Both of these lineups are heavily fortified defensively but ask a lot from the lone striker, in this case Justin Rennicks.

That worked ok for the Revs in Toronto, where Jones, Bye, Boateng and Rennicks were able to release upfield on the break and take advantage of some relatively weak goalkeeping from TFC’s Alex Bono. 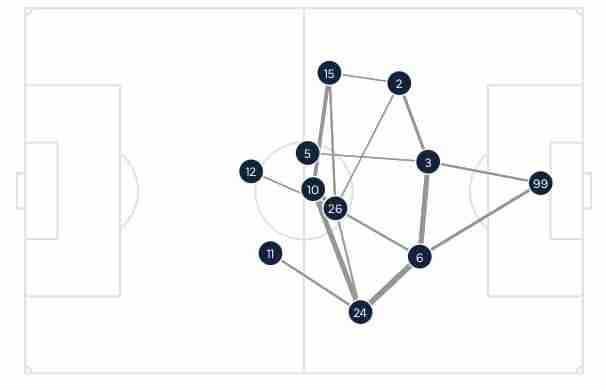 New England didn’t have much of the ball vs Toronto but, as you can see from the above passing chart, they used the 5 man back line to widen the field and move the ball laterally.  The Revs were able to pass out of pressure and funnel the bal into Carles Gil who could play wide to the fullbacks or direct to Rennicks, as he did on New England’s second goal.

This wasn’t the case at Montreal. 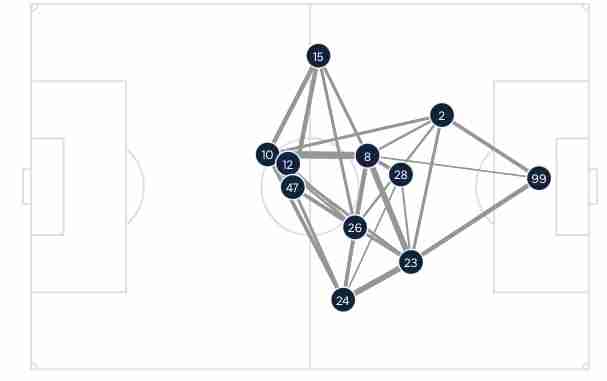 Montreal, perhaps smelling blood in the water with all of New England’s injuries, pressed the hell out of the Revs.  They disrupted the Revolution’s ability to play the ball into transition. While New England had more possession in Montreal, they weren’t able to do much with it.  You can see how deep Rennicks had to play in order to acquire that possession, seated in behind Carles Gil on the chart above.

This formation made it hard for New England to release on the counter.  Their fastest available players, ostensibly, are Brandon Bye and Dejuan Jones.  Due to the high press from Montreal, neither player was able to break out down the sideline.  Furthermore, with the 3 defensive midfielders trying to clog up the middle of the field, there weren’t really many options out wide.  You can see in the chart that there was no working the ball from the center backs up the right hand side of the field to Brandon Bye.

One “benefit” to all of the injuries the Revs have sustained, is that we get to see some of the younger players get extended run outs.  Revs homegrown Justin Rennicks got two starts in place of the injured Bou and Vrioni.  He had a decent showing against Toronto, scoring a crucial go-ahead goal.

He struggled somewhat at Montreal.  This was partly due to the formational disadvantage, but it’s also clear that he was running out of steam.  With no other true striker on the roster (especially now with Altidore in Mexico), Bruce Arena has been asking a lot from the 23 year old.  His style of play is “run hard, press hard, wear out opposing defenders” which is actually very effective, if he himself is not totally worn out.

Noel Buck and Esmir Bajraktarevic both got some run out in Canada as well, though Buck apparently picked up an injury at Toronto.  This meant that Bajraktarevic got the start for the short-handed Revolution in Montreal.

The Revs social media team have had the unenviable position of trying to put a positive spin on a dismal 4-0 drubbing in Montreal.  They’ve mostly chosen to do so by showing the same clip of Esmir on loop, on every social media platform.  Every fiber of my being wants to avoid showing that clip here.  It’s being force fed to every Revolution fan with an internet connection, and isn’t an accurate representation of the Revs night overall.  But….

Oh my, the kid has got the goods in his first MLS start 🤯 pic.twitter.com/f1UHYaixSp

It’s just such a good bit of skill from the 17 year old.  If Brandon Bye sees this pass just a bit sooner, it’s very possibly a goal and a first assist for the Revs academy graduate.